1 Original doorway through the surrounding wall destroyed in 1808.
2 The “door chapel” dedicated to John the Baptist and St Front in 1147.
3 The Enclosed Spring (“Fons Cancellatus” which gave its name to the village).
4 First courtyard and wash house.
5 Pigeon house.
6 Entrance to the monastic buildings.
7 Lower courtyard.
8 Wine crushing vat (now private).
9 Horse stables (now private).
10 Mill and bakery.
11 Logis de Bourdeilles (now the presbytery).
12 Novices’ lodgings (demolished during the French Revolution of 1789).
13 Little courtyard (novices’ cloister, destroyed after 1789).
14 Library (destroyed after 1789).
15 Refectories and sleeping quarters (destroyed after 1789).
16 Cloister (destroyed after 1789).
17 Infirmary and warming room (destroyed after 1789).
18 Abbey church (built in 1129), dedicated to the Holy Virgin Mary and Mary-Magdalene
in 1146. Rebuilt in 1623.
19 Parish priest’s garden (thus named after 1793) where there used to be a big aviary.
20 The Logis Abbatial, remodeled five times between the 12th and the 17th centuries.
21 Little Romanesque style bridge built with salvaged materials from the former
cloister.
22 In the little garden, site of the Chapelle Ste Anne dedicated to Pope Clement V.
23 The brook which irrigated a flat stretch of farmland (vegetable garden, orchard…).
24 Yew alley, where the canons could take a walk, rest or meditate.
25 Formerly the Chapelle Notre Dame du Puyer ( or Puy, i.e. Hill).
26 Fishpond connected to the river Beauronne (partly hidden under the railway line).
27 The Abbey’s Court of Justice.
28 Blessed Alain de Solminihac Priory: the living quarters of the Chanoines Réguliers
de St Victor.

Original entrance (1): The outer wall and entrances to the abbey (wicket door and carriagegate) were pulled down in 1808.

Chapel (2): Built in 1128 with stones from Chancelade quarries, it sits across the abbey outerwall and is set directly on the rock without foundations.Note the traces of the wrenching on the north and south walls outside the chapel.

Several symbols of the Christian faith can be seen in the structure itself of the entrance façade. Its lower part is a square symbolizing the created world while the upper part is a triangle evoking the Trinity – the Christian God who is Father, Son and Holy Spirit. In this triangle is a little Romanesque window and above it a traditional representation of Jesus Christ as a lamb carrying its own cross.

Under the separating cornice the centre modillion shows a carved blessing hand.

Inside is a vaulted nave composed of two bays separated by round pillars half embedded in the walls and a semi-circular choir.

Note the twelve crosses carved into the walls signaling the consecration of a religious building.

On the left side of the altar a fresco shows Christ in a red coat coming out of Pilate’s palace to be led to the Calvary (upper left side).

Above the altar one can detect the remnants of a “tetramorphic” painting (combining the symbols of the four Evangelists).

An eagle standing for John the Evangelist is still discernible.

The locked spring (3): In Latin “fons cancellatus”, motivated the settlement of a group of monks arriving from Charente, who planned to live according the St Augustine Rule.

A pipe leads the water down to the monastic buildings and another one to the wash house and further on to the garden. When there is enough water it flows into the fishpond at the end of the grounds.

The first courtyard (4): was open to everybody. Below was the wash house, and uphill the pigeon house (5).

On the left of the Logis de Bourdeilles (11), a 15th century building with a façade remodeled in the 17th century, a carriage gate and wicket door led to the monastic buildings across several courtyards. Only monks and friars were admitted there. Those quarters were built and gradually altered to follow the growth of the abbey: grape vats, horse stables, workshops, mill and bakery powered by the Beauronne waters (private property since 1789).

Behind the Logis de Bourdeilles and the abbey church were the novices’ quarters (12) and the littlcloister (13), the library (14), refectories and dorms (15), infirmary (17) and the vowed monks’ cloister (16).

In the 18th century, the Regular Canons of Chancelade won themselves a reputation as fine historians as learned as the Bernardins. After they were sold out as “national property” in 1790 all those buildings were used as stone “quarries”.

The abbey church (18): The edification of the abbey church started in 1128 and it was consecrated in 1146. In 1623 nave and choir were rebuilt with ribbed vaulting over the Romanesque walls. On the remodeled entrance portal, the centre modillion illustrates the four elements (water, earth, fire, wind) evoking the created world as invited to merge with the divine.

Inside, the lower part of the nave is composed of four Romanesque bays supporting a five bayed ribbed vault.

Further on the right are the remnants of a 13th century frieze where one can distinguish some soldier leggings. These are the knights come to murder Sir Thomas Becket, Archbishop of Canterbury, in his cathedral on December 29, 1170.

On the opposite wall one can discern Christ’s face in a fresco showing him on his way to Emmaus after his resurrection.

The transept crossing is topped by a dome with four pendentives supporting the church tower.

The choir, Romanesque until 1569, was rebuilt in the 17th century. The folding seats of the sixty four stalls are equipped with a little carved shelf called a “misericord” (mercy seat). After turning it up the friars could lean on them when they prayed in a standing position. Here, they all bear original carved decorations.

Behind the wood panels, two frescoes. One shows a quite imposing figure of St Christopher carrying the Christ Child.

Beside him, St Thomas Becket, murdered by order of Henry II, king of England, married with Eleanor of Aquitaine. A penance was imposed on the king by Pope Alexander III and he was asked to honour the holy archbishop’s memory. Which explains his evocation in several churches of Aquitaine. In all likelihood all of the Romanesque choir was originally covered with paintings similar to those two figures.

In the left transept is a painting offered Father Alain de Solminihac by King Louis XIII: Christ offended and abused.

21st century Way of the Cross: Porcelain painting. A description is available near the entrance and a prayer booklet sold at the reception office.

Outside the abbey church, along the south wall, you will walk through what used to be the parish priest’s garden (19), on your way to the Logis Abbatial (20). First built in the 12th century Romanesque style, this house was gradually altered until the 17th century, with the addition of a second floor and two wings linked up by a balustraded terrace resting on eight arches. In the course of time, this fine construction accommodated the priest of the parish of Beauronne and some of the Abbots. In the 1700s it was mainly used as a guest quarter for the crowding visitors attracted by the spiritual and intellectual reputation of the abbey.

On the right side of the main façade a Romanesque bridge (21) spans the water derivation of the mill. The bridge was built with stones re-used from the old cloister. The surrounding wall ran over a mile between the Chapelle St Jean and this place, and it was covered with tiles.

Behind the Logis lies a big empty space where the buildings previously described used to stand. They were pulled down after 1789 and re-used to build houses. The stones were also crushed in the mill to make lime carbonate for the china and glass manufacturers.

Where the choir and north transept walls meet, some frescoes show that there stood the Chapelle St Anne (22), built inmemory of Bertrand de Got’s brief visit to the abbey in 1304, at the time Archbishop of Bordeaux and later elected Pope Clement V. That area underwent several changes: you can see the remains of a staircase and openings, through which the canons could walk from the choir to the dormitories.

On your way back to the park you can stroll on across the brook (23) which used to irrigate the vegetable garden and the orchard grown on the whole piece of flatland. Further on you can walk up to the yew alley (24) and enjoy the serenity of that place. There you will find a chapel called Notre Dame du Puy (25), no longer

At the far end of the park you will see the place where the fishpond used to be (26). The fish of the Beauronne River were caught thanks to a fishtrap system. The fishpond was much larger in the past, before the construction of the railway across the piece of open country.

On returning to the Chapelle St Jean, you will find by the roadside the Court of Justice (27) where justice would be dispensed to the villages of Beauronne and Marsac in the 18th century. 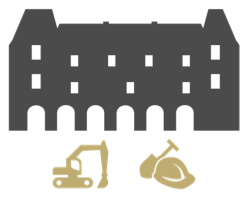